We are very honoured to invite you to Gothenburg, Sweden, for the 24th International Conference on Electrical Machines. We aim to attract 700 quality attendees from all over the world. The International Conference on Electrical Machines (ICEM) has established itself as an influential and recognized International event, being the only major international conference entirely devoted to electrical machines. Started in London in 1974, ICEM is now established as a regular event. Very successful recent editions were held in Helsinki (Finland) in 2000, Bruges (Belgium) in 2002, Cracow (Poland) in 2004, Chania (Greece) in 2006, Vilamoura (Portugal) in 2008, Roma (Italy) in 2010, Marseille (France) in 2012, Berlin (Germany) in 2014, Lausanne (Switzerland) in 2016, and Alexandroupoli (Greece) in 2018.

Chalmers University of Technology of Sweden will host the conference. Chalmers has a long tradition in the research area of electrical machines.

Gothenburg is located on the Swedish west coast, with direct connections to most major cities in Europe. This 400-year-old harbour city blends a distinct charm with the pulse of a modern urban lifestyle. You easily get around on foot or by tram and will find numerous restaurants and cafés, flourishing gardens, historic sites, museums and music. A 30-minute ride from downtown brings you to a ferry to explore the tranquil archipelago.

Welcome to Sweden and Gothenburg in 2020. 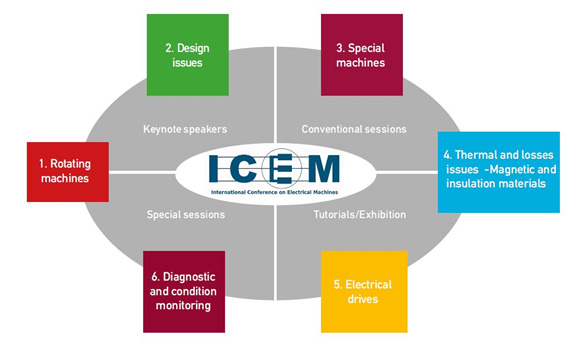 Recently the concerns about getting-worse global climate and environment push forward the developments of renewable energy conversion and transport electrification as well as highly efficient industrial drives. Electrical machines are the main components in these systems in which the electrical-mechanical energy conversion takes place. The new materials, new power electronics, and powerful design and simulation tools provide new opportunities for us to design and build more advanced electrical machines. Therefore research and development activities on electrical machines become extraordinary active during the last 5-10 years.

ICEM, as a dedicated international conference on electrical machines, has naturally become a meeting point and forum for active researchers and engineers to exchange knowledge and form new collaborations. The presentations of the latest research results will inspire participants from Europe, America, Asia, Afrika and all over the world. The discussions can be very fruitful when scholars from universities meet experts from industries.